Galicia is a green and rocky land, nestled in the North West of Spain. It is as beautiful as it is out of the way, and you would be forgiven for not knowing it was even there. But, when you visit this place, you will never forget where it lies and will forever try to get back there.

It had been 4 years since I’d left the rainy grey granite of Galicia and this time, after a stunning trip to Porto, we were slowly snaking our way back up to Galicia for the tail end of our week away and for a trip down memory lane. The train trip from Porto to Vigo is an undiscovered treasure of a train ride: stopping at quaint Portuguese towns and darting round forested mountains, hugging the coast tightly while the waves splash the lines; it is a delight for any traveller and marks no better way to enter the forbidden Galicia. Lord knows the winters are bad, rain, rain and a side of rain, but the summers they are the finest you can find in Spain: not too hot, not too cold, just right to enjoy the dusty windy streets or the open pale green forests.

The only thing you notice about crossing from Portugal into Spain is the changing of the guard from a Portuguese speaking one to a Spanish speaking one. That and looking out into the future as the land across the river Minho is curiously an hour ahead. The two border towns sit facing off across the large river with the fortress of Valenca on one side and the fortified Cathedral of Tui on the other. The train crosses the only bridge for miles and the landscape stays the same, all we really cross are the man-made constructs placed around the stunning river.

It’s only 2 and half hours from Porto to Vigo but the scenery is breathtaking and worth the 13 euros we paid. We arrived at Vigo Guixar around noon and the whiff of Atlantic air nearly bowled us over.

Vigo is not on everyone’s radar, it is not your typical weekend away kind of place but as the biggest city in Galicia and a claimant for the busiest fishing port in the world, it is worth your time and the perfect stop on your pilgrimage northwards.

We were only there for 24hrs and we needed to make the most of our time. We were staying in a small pension and although it was not one of the finer hotels in Vigo, which has a wonderful selection of hotels for every travelers’ needs, it was sufficient for our overnight stay.

A hidden gem of Vigo and delicately placed on the edge of Europe are the Cies islands, the very reason we were there. I had to see these islands one more time as they are marketed as the Caribbean of the North West and as absurd as that sounds… they aren’t wrong. You can catch a ferry from Vigo to the islands several times a day and with only 2000 people being permitted daily you have to be quick when it is peak season. You need to bring ID with you and they will email you your Xunta government permission to go. Tickets vary from 16 to 18.50 euros depending on ‘off and on’ season but it is worth it.

The island facilities are primitive: there is a campsite with toilets, two restaurants and that’s about it but when the islands come into view you are instantly struck by the white sand beach that rolls across them and the two peaks that you can walk up to and take a view out over the vast expanse of the Atlantic. The sea is crystal clear, and as cold as ice, no matter how enticing the sea may seem, a dunk is not for the faint hearted.  We spent the afternoon on the beach, in true lazy holiday style, getting burnt on one side and then slowly browning in a weakening September sun, it was paradise. We left the island in the evening on one of the last boats and we had already decided, as we set foot on the boat, that we would be back again.

Vigo has a vibrant food and wine scene with a lot of trendy places to eat and drink; morning, noon and night. We chose a fantastic traditional restaurant to have some Galician food. Galcian food is not for everyone but if you like seafood then you will like Galician food. However, in reality, there is a lot more to the food scene than just seafood and we dived into paprika fried pieces of pork (zorza), pulpo (octopus) and sardines (xoubas) and washed it down with some of the finest white wine we had tried during our trip, a fine glass of Albarino wine. When visiting any region in Spain, it is always a fine idea to try their local wine; Albarino is one of these fine examples and tastes like a damp Galician forest with notes of fresh granite and the sweetness of the air on a walk through a Galician meadow in spring, a real treat! We were wined and dined in a true Spanish style and then spent the evening walking up and down the old town streets, watching the city explode into life as the bars spilled out onto the granite prazas with their looming granite churches.

The following day we had a quick coffee and some tostada con tomate and headed for the train station to make our way up the coast to Pontevedra. We took the 33 minute slow train, but now a high speed train operates connecting Vigo, in the south, with A Coruna, in the north, and only takes a smooth 13 minutes costing only a few extra euros for the pleasure. We opted for the slow train as I had many things I wanted to point out, from my time walking the Camino de Portugues, like an overexcited child on his very first train trip.

Two teachers who like to write about travelling, and you guessed it, teaching. One of us is from England and one of us from Greece. If you like what we write then subscribe and enjoy! View all posts by Teaching in Spain 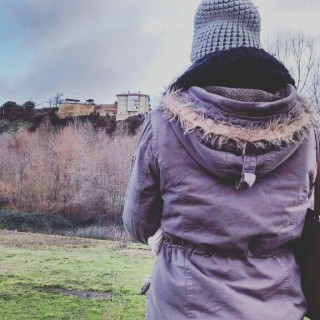 Two teachers who like to write about travelling, and you guessed it, teaching. One of us is from England and one of us from Greece. If you like what we write then subscribe and enjoy!

Follow Teaching in Spain: An Englishman and a Greek on WordPress.com

There was an error retrieving images from Instagram. An attempt will be remade in a few minutes.

Teaching and training in southern Italy.

Reflections of an English Language Teacher

Right through my journey

Because I am not a role model, but I still have an opinion

On a quest for happiness. Decided to blog about it.

Daily Thoughts and Meditations as we journey together with our Lord.

Tales of humour, whimsy and courgettes

Teaching English as a Foreign Language

Come explore the world with me!